Teaching and research are essential activities at the Gault Nature Reserve. The first scientific studies at the site date back to 1859. Famous scientists such as Sir John W. Dawson, T. Sterry Hunt and Brother Marie-Victorin have explored the vast forests of Mont St. Hilaire. Today there are over 400 scientific articles, nearly 100 graduate and postgraduate theses, more than 50 reports and approximately 30 chapters or books that have focused on Mont St. Hilaire.

Mont St. Hilaire has a worldwide reputation for the diversity of its minerals as well as its flora and fauna. The mountain is also covered by an old-growth forest that has never been cut since colonization.

The special nature of the mountain, its rich scientific history, its proximity to Montreal, its accommodations and its teaching and research facilities make it an exceptional venue for academic and scientific activities.

The Gault Nature Reserve provides a living laboratory for university students. Field studies are a rewarding experience in the academic process and an essential complement to the classroom.

Ecological and evolutionary response of phytoplankton to rising CO2

Bibliography of past research

Courses at the Reserve

Teaching thrives at the Gault Nature Reserve. Classes are lively and students can acquire practical and theoretical skills in various fields of study.

Biology (Sci): Field studies of ferns, fern allies, conifers and flowering plants; the use of keys for plant identification.

The Gault Nature Reserve has a lot to offer to researchers and students. In addition to our wet lab and our classroom, you can also use our row boat, pontoon and other facilities:

An experimental dock used for the study of phytoplankton communities, it provides a link between observational field studies and controlled laboratory experiments. It can contain up to 32 replicas (mesocosms) enabling manipulation of environmental conditions without adverse impacts to the natural ecosystem.

Experimental pond (6.5 m in diameter and 2 m deep) covered by a geodesic dome for environmental control. This infrastructure enhances the ecological realism of our experiments while retaining very high levels of control and replication.

The Gault Nature Reserve contains a network of autonomous weather stations that continuously monitor environmental conditions in the forest ecosystem. These weather stations are linked via radio to a central server that records the information. 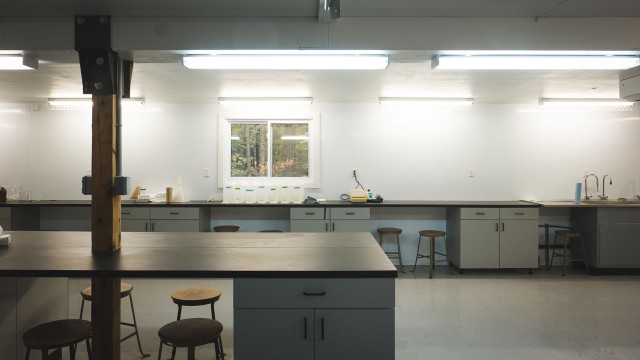 This lab was once the old Stearn Lithological Library, used to preserve rock samples collected by McGill University researchers. Marc-André Langlois, infrastructure manager for the Gault Nature Reserve initiated and supervised the conversion of this space into a teaching lab.

Nature, human connection and science: these are the words Egor Katkov used to describe his internship at McGill University’s Gault Nature Reserve.

Egor’s adventure began in 2014, when he was 21. He wanted to complete an internship during the last summer before he finished his bachelor’s degree in biology and information technology. He initially began looking into opportunities in IT, but in the end, he was more interested in the environment. A post by the Gault Nature Reserve on the McGill website caught his eye. “I said to myself, ‘that’s what I want to do: go out into nature and do something tangible.’ I already had experience working at summer camps as a climbing instructor. It was sort of the same vibe, but instead of taking care of kids, I was taking care of science things,” he joked.

During his summer at the Gault Nature Reserve, Egor worked on a number of research projects. He measured trillium, a type of plant that flowers every seven years, to assess the impact of white tailed deer on the plant’s height. Another project he worked on involved “HOBOs,” sensors that measure the temperature of the air and the soil. “Our job was to collect the data. We used a map and a GPS to find these mini weather stations,” he said. The internship introduced him to the world of research. “It really gave me a taste of what it’s like to ‘do science.’”

Of all the things Egor worked on that summer, the phytoplankton project was by far his favourite. The experiment was conducted in a big transparent dome pumped full of CO2, with a pool in the middle of it. “We put a probe in the water to see the concentration of chlorophyll and the four different types of phytoplankton,” he explained. We were trying to find out if atmospheric CO2 would affect phytoplankton in the water.”

Egor enjoyed his research on phytoplankton so much that he chose it as the focus for his graduate studies. “I really liked being outdoors and using the probe to gather data on phytoplankton,” said Egor, now in the fifth year of grad school. “I also wanted to go back to the Reserve. It gave me the perfect excuse.” He began his master’s degree under the direction of Gregor Fussmann, then the director of the Reserve, before being fast-tracked to doctoral studies.

When he returned to the Reserve, he repeated the phytoplankton experiment, but this time in the Reserve’s lake rather than in a small pool. “We had a floating dock with holes in it that were about one metre in diameter,” he described. We put plastic bags in them that we filled with lake water.”

During the first year of his master’s program, Egor was able to rely on crowd-sourced science for assistance. “I asked members of the McGill Outdoors Club to help me with my experiment. I gave them rides to the Reserve, and in the morning, they helped me take samples, then in the afternoon, when I was in the lab, they could hike around the mountain.”

Before he finishes his doctorate, Egor will travel abroad with support from ÉcoLac, an NSERC training program in lake and fluvial ecology. “I’m planning to go to the University of Amsterdam. There are a lot of people there interested in the relationship between CO2 and phytoplankton. I think it’s a great place to collaborate and design a project together,” he said.

Egor says that after he completes his doctorate, he will be open to opportunities. “I would enjoy doing a post doc, but I’d also enjoy working for a company or the government. I could also see myself becoming a CEGEP or university professor, or starting my own business and doing something real to help the planet.”

No matter where he ends up, Egor will always remember the internship that made it all possible. “I had a really positive experience. If I had to do it all again, I would have a better idea of how to run my experiments,” he laughed. “But really, overall, I wouldn’t do anything differently. I would recommend the experience to anyone who is interested in science and loves being out in nature and working with their hands.”

If you want to inspire future scientists and help other students have an experience like Egor’s, you can support McGill University’s Gault Nature Reserve.

If you are interested in joining the internship program at Gault Nature Reserve, send your CV to David Maneli, Associate Director.