On August 29th, 2022, Principal Suzanne Fortier helped launch a weather balloon into the baby blue sky above the Gault Nature Reserve in Mont-Saint-Hilaire. Researchers say the balloon will travel some 20 kilometres upward collecting valuable weather information. As the giant balloon, fitted with a red McGill banner, soared higher and higher, a group of nearby children oohed and aahed, perfectly capturing the excitement of the moment. 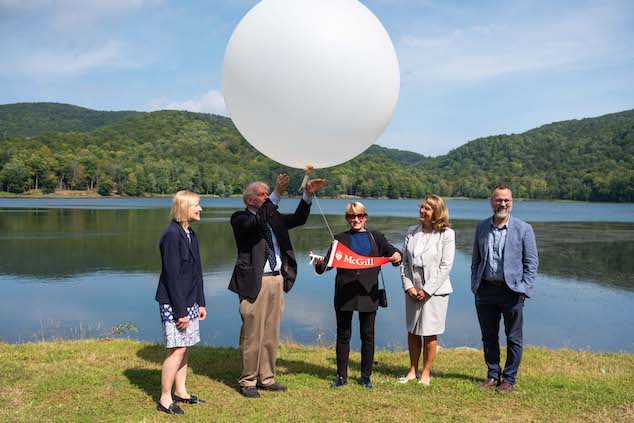 Minutes before, the Principal and a host of dignitaries launched the new Adaptable Earth Observation System (AEOS) research facility at the Gault Reserve. The AEOS is open for business for investigators conducting cutting-edge research on extreme weather conditions. It also serves as a lab for advanced ecological research. Thanks to a Canada Foundation for Innovation (CFI) grant, this new pavilion paves the way to advancing environmental research by linking the Gault Nature Reserve with the project’s research stations in the Saint-Lawrence Valley, and in different parts of the world. 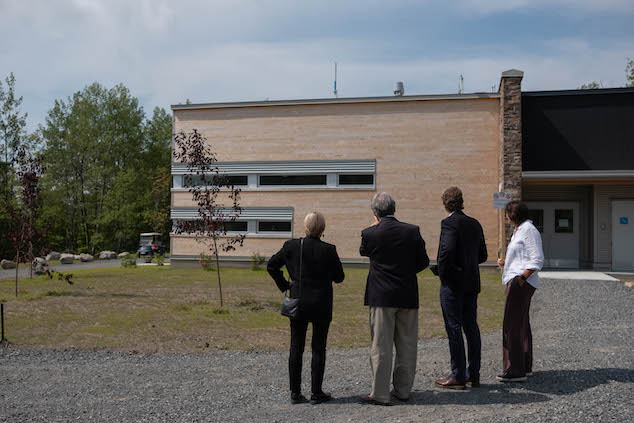 “This facility represents a major boost in our research capabilities, with an influx of very sophisticated observational systems that will analyze and model the Lawrence River Valley earth system,” said John Gyakum, Chair of Atmospheric and Oceanic Studies.

“I emphasize the letter A [in AEOS], because it represents ‘adaptable,’ indicating that our observing systems will be able to be adapted to specific scientific goals of a project,” said Gyakum. “That’s the beauty of this operation. It’s not just one building. It’s not just a bunch of instruments at one fixed location. The purpose of this project is to adapt ourselves to the scientific needs of projects that can be held in various regions in Quebec, Canada and any other country in the world.”

“The research conducted at the [AEOS Lab] will address some of the most pressing issues facing the planet,” said the Principal. “We must protect the environment, but we must also harmonize the relationship between humans and the environment that will allow everyone to thrive.”

Principal Fortier went on to thank the people and agencies that have supported the creation of the AEOS, notably the CFI, the government of Quebec, and the mayor and the citizens of Mont Saint-Hilaire. 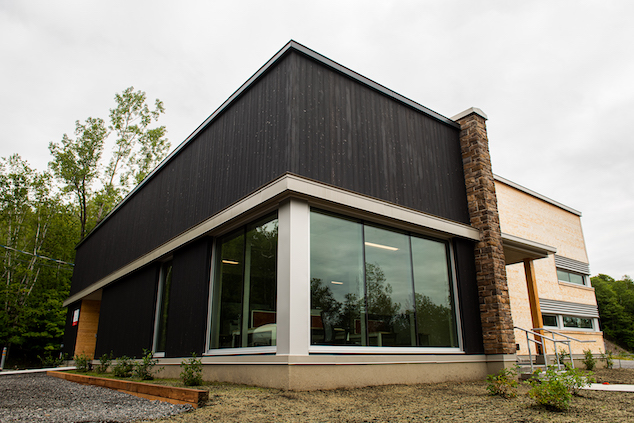 Those spearheading research at the new EOS Laboratory, including Department of Atmospheric and Oceanic Sciences Professors John Gyakum, Frédéric Fabry, Daniel Kirshbaum, and Yi Huang, are studying weather systems in the Saint Lawrence River Valley. Professor Hans Larsson and colleagues in the Biology Department, Melania Cristescu, Gregor Fussman, Andrew Gonzalez, and Irene Gregory-Eves, are also studying the effects of weather and climate on living organisms. The AEOS will also facilitate analyses and studies of water, soil, and biological samples. Combined with a range of meteorological instrumentation, drones, and mobile laboratories, the EOS Laboratory will serve as a centre for the acquisition, processing, and analysis of data on site. 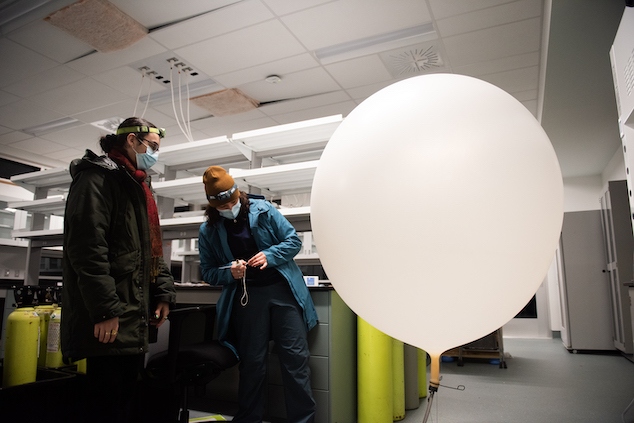 Some research is already underway. For six weeks in February and March, researchers from McGill were involved in a large-scale North American study which spanned the St. Lawrence River Valley and included researchers from the Université du Québec à Montréal, the University at Albany, the University of Wyoming, the University of Colorado and the National Research Council. They collected data during extreme weather conditions to better understand the transitions between winter precipitation types, such as freezing rain and snow. This research is also expected to facilitate improvement in weather predictions of winter precipitation types.

This article was written by Claire Loewen and Neale McDevitt, originally published in the McGill Reporter on August 29, 2022.