White-tailed deer (Odocoileus virginianus) populations in the region have been increasing for several decades. The combination of milder winters and the loss of most natural predators have significantly reduced deer mortality. On the other hand, females will often give birth to two fawns per year when the conditions are right. As a result, many areas are now experiencing the highest deer densities on record, which means there is a lot of pressure on their food sources.

In 2006, Dr. Martin Lechowicz, the director of the Reserve at the time, saw this deer “baby boom” as an opportunity to implement a new long-term research project on Mont Saint-Hilaire. He was particularly interested in capturing the impact of the increasing deer population on the understory vegetation of this old-growth forest. Under Dr. Lechowicz's initiative, a student and a few Reserve employees built 32 deer exclosures. What is an exclosure, I hear you ask? It is the opposite of an enclosure: instead of keeping animals in, it keeps them out. This tool allows us to compare the vegetation protected by the exclosures to the unprotected vegetation growing in the forest. This comparison gives us a reasonable estimate of the impacts of white-tailed deer overpopulation on the health of the forest over the last 16 years. 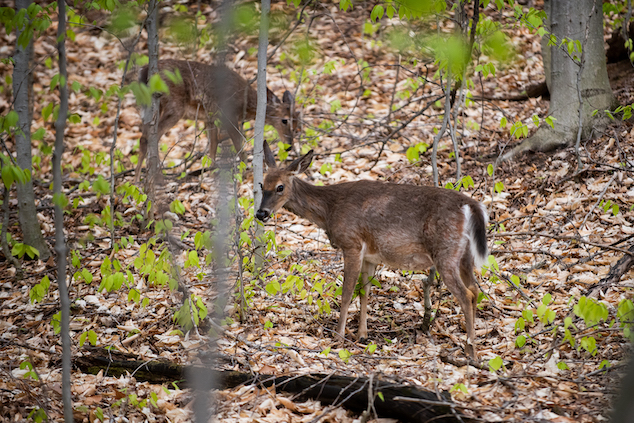 After a long winter without much food, deer are on the lookout for anything green in early spring. Therefore, some of the first plants to emerge, ephemeral spring flowers, are in high demand. The white trillium (Trillium grandiflorum) is particularly sought after by deer. With its three large leaves, this plant can reach 30 centimetres. It makes for a tasty meal for the deer. White trilliums produce a large white flower in spring. However, it can take the plant up to 17 years to mature enough to produce its first flower.

In fact, white trilliums are a key indicator species of deer browsing intensity in the surrounding forest. Monitoring this plant is helping Gault confirm that deer densities are unsustainably high, as aerial surveys over the Reserve suggest. Their impact is evident when comparing the physical characteristics of trillium in exclosures to those in open areas. 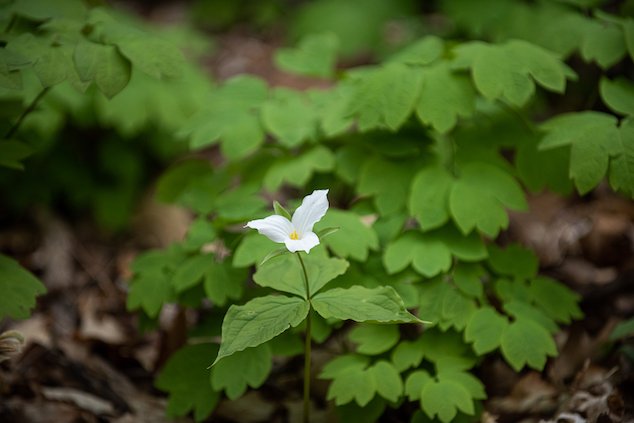 White trilliums can take up to 17 years to mature enough to produce their first flower (photo: Alex Tran)

With repeated browsing by deer year after year, trilliums at the Reserve are struggling to gain the resources they need to reach maturity. The data collected over the years show that trilliums growing in the open are, on average, smaller than those protected by the exclosures. There are also fewer in the reference areas outside of the exclosures where deer can freely browse. In fact, it has been many years since trillium bloomed in these reference areas, while many of their protected counterparts bloom every year.

Thanks to the vision of Dr. Lechowicz, we have been able to capture a glimpse of the impacts of white-tailed deer overabundance through time. Long-term monitoring projects like these are of great value to the scientific community and can help us compensate for our shifting baselines. Indeed, for many, the forest of Mont Saint-Hilaire may look pristine or unchanged. However, those who have been visiting the Reserve for many decades may not agree. White trillium used to be so abundant that it would cover the ground along the trails with flowers like white carpets. As an indicator, the decline in trillium populations tells us the story of how deer overabundance has affected the forest in the last decades. 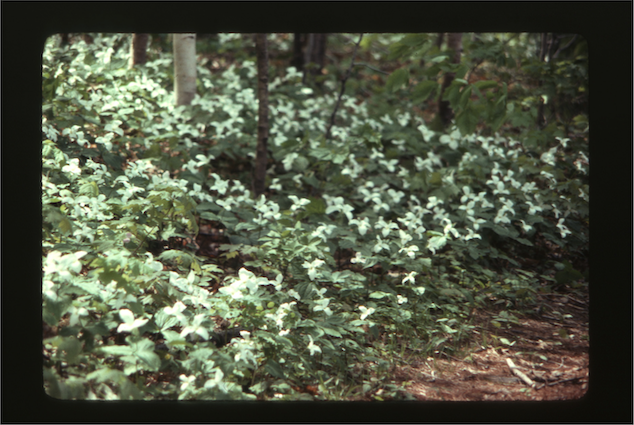 This undated photo shows the abundance of white trillium along a trail at the Gault Nature Reserve (photo: McGill University)

This long-term monitoring project is still ongoing. In 2019, researchers from Dr. Virginie Millien’s laboratory built 16 new exclosures, bringing our total to 48 exclosures. In a few weeks, our interns and other researchers will head out in the field with their rulers and notepads for a new exclosure sampling season.

The deers love flowers too! A deer here, a deer there, are they everywhere?!

THE DEERS LOVE THE FLOWERS TOO!

May 18, 2021. Forest ecology is a complicated web of interactions and over browsing by deer can disrupt the strands of the web and the balance of these interactions.

I see a deer here, a deer there… are they everywhere?