The human history of Mont Saint-Hilaire is fascinating. The fate of the mountain has been closely connected to the lives of the men and women who have shaped this land. A bit of luck was involved in preserving the Mont Saint-Hilaire ecosystems. The visionary Brigadier Hamilton Gault was in large part responsible for that. This man’s vision has now been taken up by McGill University.

This region originally was home to Amerindians who settled in the St. Lawrence Valley nearly 8,000 years ago. When Jacques Cartier arrived in 1534, he found two tribes in the region: the Algonquins and the Iroquois. The Iroquois were primarily south of the St. Lawrence River. The Algonquins had once occupied that land, but were chased out by the Iroquois. The Algonquins gave the name “Wigwomadensis” to what we now call Mont Saint-Hilaire because its shape resembled that of their dwellings. It is not known if the Amerindians ever had a significant presence on the mountain since no artifacts have ever been discovered.

Samuel de Champlain explored the region in 1603 and 1609. The European settlement of the region, however, only really began in 1694. Jean-Baptiste Hertel de Rouville had been granted a seigneury that surrounded the mountain as a reward for his military exploits. This reward coincided with the defeat of the Iroquois at the hands of the Carignan-Salière Regiment. 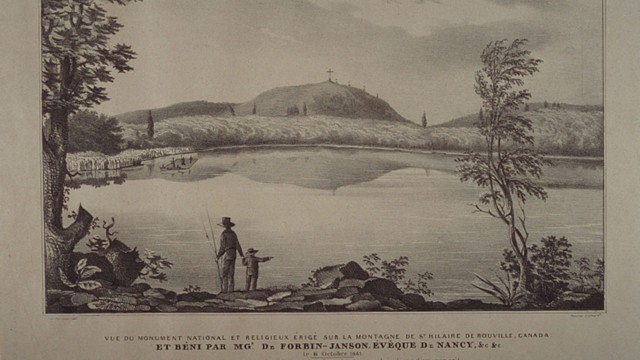 The development of the region proceeded slowly throughout the 18th century. The first farm was established only in 1731. What is now the municipality of Mont Saint-Hilaire was the location of three villages at that time. The first was situated near the river and was the first to develop. The second, located on the mountain near the outflow of Lake Hertel, was founded in 1745. The rail station village was developed last with the arrival of the railroad. In 1746 there were only 30 inhabitants in the entire seigneury. In 1751, clearing began on the lower flanks of the mountain and by 1768, a road along the flank of the mountain was established with orchards being planted on the south-facing slopes. This initial phase of European colonization of the region ended with the establishment of parish churches at Saint-Jean-Baptiste (1796) and Mont-Saint-Hilaire on the shore of the Richelieu River (1798).

The mountain village community owed its development to the stream and the energy that it provided. A mill was put into operation in 1750. You can still see the remnants of several mills, including the Maison Guérin, located near the entrance of the Reserve, an old seigneurial mill first constructed in 1775 and reconstructed in 1848 after being destroyed by fire in 1840.

A dam was constructed at the Lake Hertel outflow to regulate the water flow. In the 19th century, nine mills, a distillery, three tanneries, two forges and a foundry were powered by that energy. In 1850, about 1,500 people in 260 families lived and worked near the stream, clearly more than the number living in the parish village of Mont-Saint-Hilaire near the river.

In 1841, a large cross with a chapel at its base was erected on the Pain de Sucre summit. It was 30 metres tall and 9 metres wide, and people could climb up inside it. A winding trail with the stations of the cross led to the summit. Five years later, the cross came down in a violent storm. The chapel was completed destroyed by fire in 1876.

In 1844 the seigneury became the property of the Campbell family. Thomas Campbell built the Lake Hertel dam, rebuilt the mill, promoted the hydraulic industry and constructed the region’s first school. In 1851, he built the Café Campbell on the west shore of Lake Hertel and advertised railroad excursions from Montreal to this mountain retreat. The café was destroyed by fire in 1861.

His sons undertook the construction of the Hôtel Iroquois and completed it in 1874. It prospered until it was destroyed by fire in 1895. It is believed that it was located near the current Manager’s House. 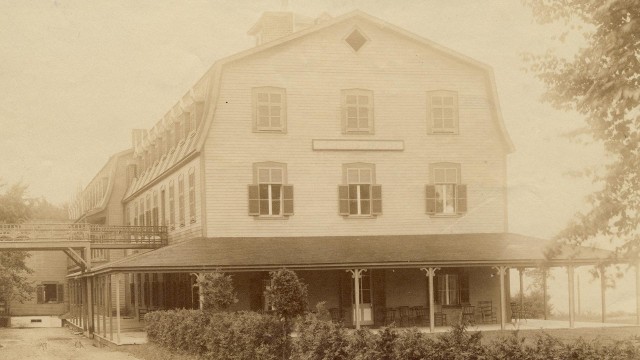 Development of the mountain village and its surroundings ended at that time. Tourists would only come to the mountain for the day, preferring instead to visit the Eastern Townships. In addition, steam power arrived and replaced the mills. The parish became the centre of activity. People left the mountain, and it returned to a state of peace and tranquillity.

In 1913, the Campbell family sold 890 hectares of its property to a wealthy young man, Andrew Hamilton Gault. By 1920, the 522 inhabitants of Saint-Hilaire had electricity, and there were 802 other inhabitants in the neighbouring countryside. By 1941, an aqueduct from Lake Hertel was supplying water to the 5,000 homes in Saint-Hilaire and Beloeil.

Gault spent many summers on his property. He loved nature and his mountain, and he was required to defend it many times to keep it all intact, fighting off uranium and diamond mining prospectors as well as expropriation threats to his lands for sandpit operations. Gault would remain vigilant and firm. In 1940, he sold his Lake Hertel water rights to the municipality of Beloeil.

In 1957, Gault constructed a vast manor house on the shores of Lake Hertel where he lived for a few months before his death. He left his entire property to McGill University, knowing that a well-established institution of higher learning would be able to protect the mountain for future generations. 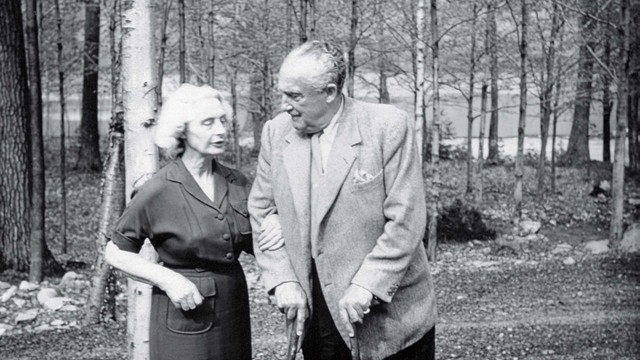