Around the world, climate change is affecting lakes in complex ways. In temperate regions like Quebec, warmer temperatures lead to lake ice forming later in the fall. Yet, scientists know very little about how these changes affect life under the ice.

In 2018, Marie-Pier Hébert conducted a study on the Lac Hertel mesocosms to take a closer look. To simulate the effects of climate change, the team of researchers broke the ice forming on the water surface daily at the beginning of winter. Their recently published results show that many changes occur in the aquatic food webs when ice forms later. The researchers observed changes not only during that winter, but also in the following spring. In these modified food webs, some species emerged as winners benefiting from this delayed ice formation, whereas others did not.

Results of the study

By breaking the ice on the water surface and delaying the ice formation, they discovered a series of cascading effects. Delaying ice formation did not affect water temperature. It did, however, allow additional light to penetrate the water surface. With more light available in the water, the conditions were favourable for photosynthetic organisms that depend on light to survive. Algae, for example, were more abundant.

Because algae are at the base of the freshwater food chain, changes in algae concentration can affect many other species. Marie-Pier found that some zooplankton species that feed on algae (think small herbivores) were more abundant when ice formed later. This increase in food resources also helped some accumulate more fat reserves. Some zooplankton species are higher up on the food chain and feed on these small herbivores. In certain species, the increase in prey quantity and quality appears to have helped more individuals survive.

While these results show that delayed ice formation can help some species, not all zooplankton species can benefit from it. Species that cannot survive in winter because of the water temperature, for example, did not have higher survival levels despite the relative abundance of food. These species may even find themselves disadvantaged in the spring when the ice melts and their competitors or predators are already present in high numbers. 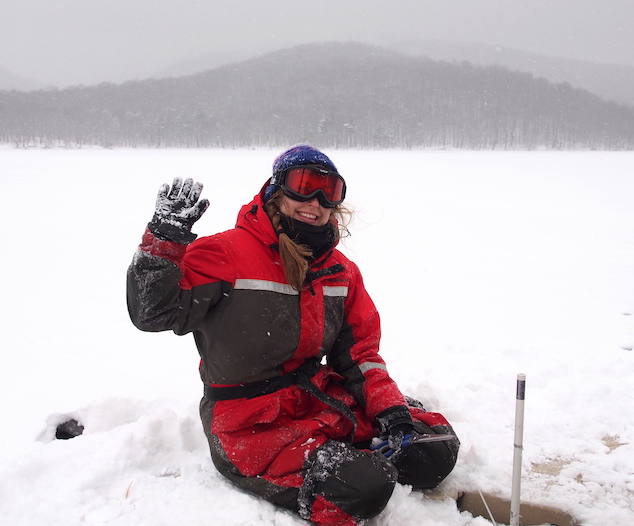 Most researchers who look under the ice of freshwater ecosystems measure abiotic (non-living) factors. With this project, Marie-Pier and her team were among the first to focus on living organisms. They showed how research infrastructures like the Lac Hertel mesocosms can help other scientists to better understand how climate change will affect the health of our lakes in the future.