Of all the beautiful animal displays, perhaps none is quite as majestic as that of deer antlers. Around this time of year, male white-tailed deer (Odocoileus virginianus) parade around the Gault Nature Reserve with their head held high in search of mates. But what exactly are antlers?

Easily mistaken for horns, which are widespread in the animal kingdom, antlers are only found in the Cervidae family. While horns, in most species, can be found in males and females, antlers are usually found only in male deer (except for the caribou, Rangifer tarandus). Most importantly, antlers are the only mammalian organ capable of complete regeneration! Horns stay on an animal’s head all its life and will not regrow if they are injured. Antlers, however, are grown and shed every year. Scientists study this unique and impressive annual cycle to try to understand mammalian organ regeneration. Current research focuses on understanding the stem-cell-like properties allowing this unique feature of cervids to occur in the hope that it would allow us to regenerate human organs and limbs.

In spring, antler buds start growing on the male’s head. At that point, the antlers are covered in velvety skin rich in blood vessels that nourish the antlers as they grow. The antlers continue growing at astonishing speed until late summer, gaining up to 2.5 cm per day! In late summer/early fall, the antlers calcify, and the velvety skin dries up. The velvet sheds in a sometimes-bloody display and some males will rub their antlers on trees to facilitate the process. Once the velvet is shed, all nerve endings of the antlers are gone with it. By that point, the reproductive season is in full swing, and males will use these antlers to fight for access to females. Once the reproductive season is over, males will shed their antlers. In Quebec, this can occur between December and March, but mainly in January. The cycle is ready to be repeated all over again! 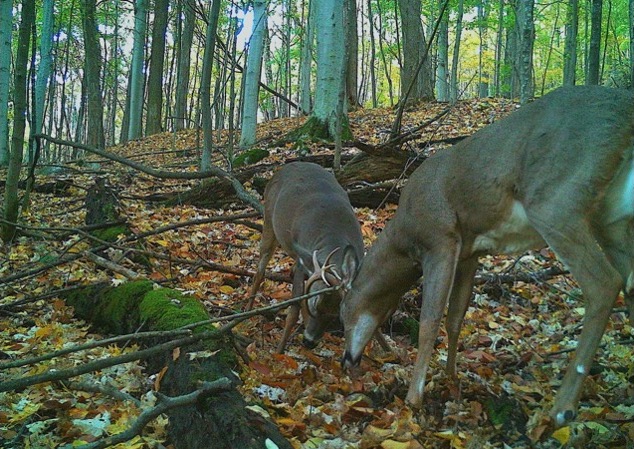 Scientists explain that male deer shedding their antlers highlights the costs of elevated high testosterone levels. Indeed, males are at an increased risk of injury and illness when their testosterone is highest during the reproductive season. This elevated risk is due to a mixture of reproduction-related behaviour such as male-male fighting. They will also usually spend most of their time looking for females rather than acquiring food resources. These types of behaviours are obviously not sustainable in the long run.

The next time you cross paths with a white-tailed deer at the Reserve pay close attention to its head. In the winter and spring, you can try to spot the bony protrusions from which antlers will grow. Try to notice how rounded and soft the antlers look in the summer, thanks to the velvety skin covering them. In the fall, enjoy the deer’s majesty in all its glory.